FIP BLUES presents his Action Plan to the members of ICCAT Sub-Commission 4 as part of his SUSTAIN HOOK programme. 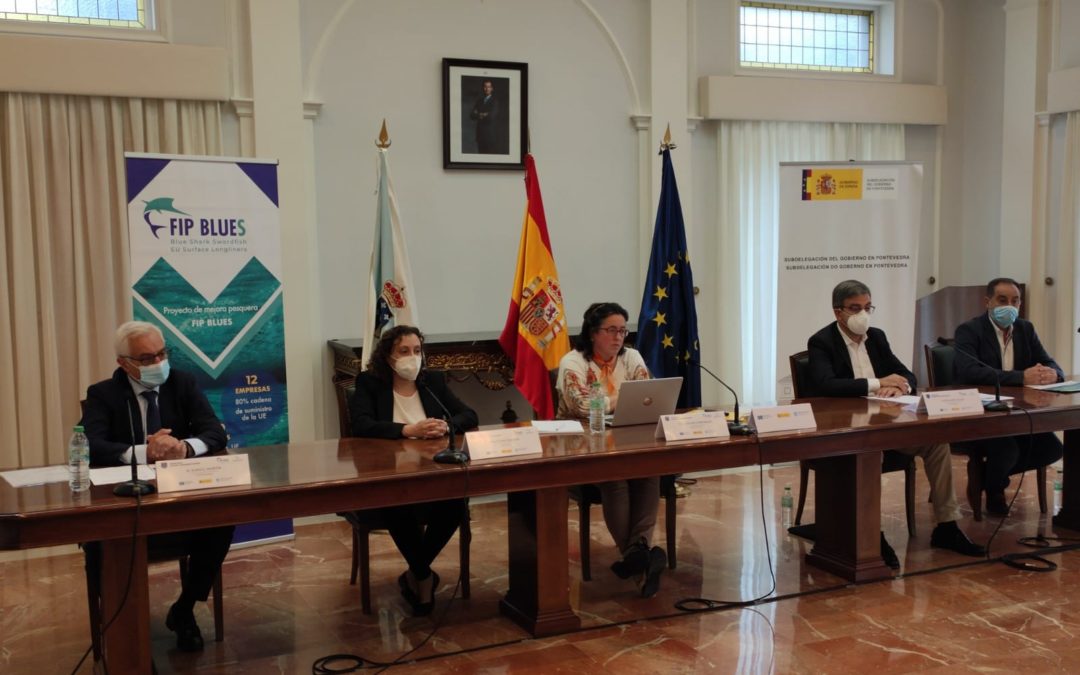 This morning, from the Government subdelegation in Pontevedra, the members of FIP BLUES presented the SUSTAIN HOOK programme to members of ICCAT Sub-Commission 4 on the occasion of their meeting on 6-7-8 July.

The event was opened by Antonio Lizcano, Deputy Director General of Agreements and Regional Fisheries Organizations of the Government of Spain, who highlighted the importance of this webinar, because the surface longline fleet is currently a lesson in responsibility and the provision of scientific data thanks to an internationally leading Observation Programme. He also stressed the importance of providing data on the actions being carried out by the fleet for the sustainability of the fishery.
The moderator of the event, Josune Larrañaga, vice-president of ANECTEAM, presented the FIP, as well as the SUSTAIN HOOK programme.

FIP BLUES is a collaborative project between 4 Fisheries Producers Organisations (ORPAGU, OPROMAR, OPP07-LUGO, OPNAPA) and 14 companies in the supply chain, which have formed ANECTEAM (National Association of Marketing and Processing Companies of Highly Migratory Species), to improve the sustainability of the swordfish and blue shark fishery caught by surface longline in the Atlantic, Pacific and Indian Oceans.
FIP BLUES groups 124 surface longline vessels, representing 90% of the European surface longline fleet. Swordfish and blue shark catches amount to 29,000 tonnes. The turnover involved in the commercialisation of these catches amounts to almost 100 million euros, generating more than 1,200 direct jobs on board the vessels.

The main objectives of FIP BLUES:

To achieve these objectives, tools and methodologies based on the MSC standard are used to measure fishery performance and progress over time, assessed by an independent body such as Fishery Progress.

In 2014, the first pre-assessment of the fleet’s fisheries based on MSC standards was initiated, which, thanks to the results, has led us to carry out this surface longline fishery improvement project that started in 2018.

On the other hand, SUSTAIN HOOK is the communication programme of the work carried out in the field of fisheries sustainability by the FIP BLUES promoters, with the aim of informing all interested parts of the work carried out and planned for the future through the Swordfish and blue shark Fishery Improvement Project. This will be a fundamental and determining tool in the visibility of the FIP.

Afterwards, it was the turn of the representatives of the FPOs (Fishery Producer Organisations) to present all the actions carried out by the FPOs for the sustainability of the fishery and the improvements proposed in the FIP BLUES Action Plan, which they have been working on for years.

FIP BLUES has maintained fluid communication with researchers and research organisations, working with internationally renowned scientists to improve data evaluation, and maintaining a direct relationship with researchers from the Spanish Institute of Oceanography.
Dialogue and collaboration has been fostered with administrations such as the General Secretariat for Fisheries, with whom a collaboration agreement has been signed, as well as with the Xunta de Galicia and the Port Authority of Vigo, and contact has been maintained with the DG-MARE.

Juan Martín, manager of OPROMAR, presented one of the most important actions of FIP BLUES, which is the implementation of a robust and homogeneous Observer Programme for the entire fleet, improving the minimum percentage of observation, and also the quality of the data collected. This programme started with physical observers from entities accredited by the different RFOs (Regional Fisheries Organisations), and is now complemented by innovative electronic observation technologies.

Mitigation of interaction with protected species such as birds and turtles is vital for the FIP BLUES fleet. Although interaction is not very high, being immersed in an improvement project has led crews to continuous training in mitigation techniques and protocols, and fishing companies to carry out pilot projects to test mitigation devices and technologies.

Juana Parada, manager of ORPAGU, spoke about the courses carried out by the fishermen for turtle capture mitigation and release management when turtles are caught. She also spoke about innovation in the design and construction of on-board handling and release tools, such as a lifting brace and release pole, as well as pilot projects with circle hooks, which resulted in a worsening of release facilitation in case of interaction.

For his part, Edelmiro Ulloa, deputy manager of OPNAPA, presented the training and initiatives carried out for the mitigation of interaction with seabirds. In this case, the courses for the crews discussed possible initiatives and devices to avoid interaction, as well as instructions for carrying out release protocols in case of accidental capture of a bird. The FIP BLUES fleet has carried out several pilot projects with mitigation devices such as the ESPANTAVES project for the design of deterrent devices to be placed on FIP BLUES vessels, or the pilot project with the SKADIA device that involves the protection of the hook by means of an encapsulation device until it reaches the fishing depth.

José Manuel Fernández, technical secretary of the OPP07-Lugo, spoke about the good practices implemented in the FIP BLUES fishing fleet, including good environmental practices such as the reduction and management of waste on board, the energy optimisation of vessels, the management of catches avoiding and reducing fishing discards, ETP catches and combating IUU fishing. Also included are good social practices ensuring and improving social standards as set out in ILO Convention 188, as well as good trade practices including food safety, hygiene practices on board, and ensuring traceability and consumer information.

The last item on the agenda was to give a voice to different stakeholders identified by FIP BLUES members, such as research organisations, NGOs or fisheries management bodies.

The first to speak was Pedro Ferreiro, director of fisheries and markets at Sustainable Fisheries Partnership (SFP), the main supporter of FIP BLUES since its inception. Pedro introduced his organisation, which is an environmental NGO that aims to reduce the impact on the marine environment by improving fisheries management in order to achieve sustainable fisheries production. This is done through, among other things, improvement projects such as FIP BLUES. For this, the Fishery Progress initiative is used, which belongs to another NGO called FISH CHOICE, a website where all the fishery improvement projects worldwide are collected with information on the progress and activities carried out within each one of them, based on MSC standards. FIP BLUES is an example of fleet leadership behaviour to achieve sustainability of their fisheries.
A video was recorded with different testimonies from other stakeholders such as Pablo Carrera, director of the IEO’s Vigo Oceanographic Centre, who highlighted the importance of the IEO’s historical collaboration with the surface longline fleet in the collection of data, as well as the union of the sector in initiatives that promote the improvement of sustainability and enhance the value of fishery products.

María Luz Parta, SUBMON’s project technician, also spoke about the importance of the sector’s involvement in mitigating turtle interaction, as well as their interest in being trained in on-board release protocols, highlighting that when turtles are caught using this gear, mortality is very low.

For his part, Alexandre Rodriguez, secretary of the LDAC, expressed his full support for the initiative, and highlighted the great work being carried out by the fleet integrated in FIP BLUES, which is also part of the LDAC. He also highlighted the opinions drawn up by the Advisory Council.

After these interventions, the following conclusions of the webinar were read out:

This was followed by a round of questions, in which several issues regarding the development of FIP BLUES were discussed, such as the consumer dissemination campaigns that are currently underway, the creation of the FIP BLUES brand to identify the product from the project fleet, the available observation data that the fleet provides annually to the fishing administration, as well as the existence of other surface longline FIPs and the relationship with FIP BLUES.

Webinar within the framework of the PPyC (Production and Marketing Plan) of the participating PPOs, co-financed by the FEMP, the MAPA and the Xunta de Galicia.